The Sierra Leone Marathon is often referred to as the world’s toughest marathon, as runners face gruelling temperatures and humidity levels which would test any athlete.

The risks are very real, and runners are briefed about the dangers the night before.  Dehydration, over-hydration and heat stroke are all potentially life threatening situations that athletes may encounter as they make their way around the course.

Running World Marathon called it the “craziest and most worthwhile marathon in the world.”  With 30 degree heat and humidity levels reaching 90%+, this is without a doubt one of the hardest African marathons.  Whilst this is a tough race, 50% of the people who run the event are first time marathon runners – they are of the opinion that if you are going to run a marathon, it might as well be a really impressive one!  The marathon isn’t about achieving a personal best, and even seasoned marathon runners will struggle to even match an existing PB.  That said, the local runners achieve amazing times, and this year, for the first time ever, there was an expat on the finishing podium.

The Sierra Leone marathon is located in Makeni, a three hour drive from Freetown, the country’s capital.  The course is considered the toughest in the world, not only because of the extreme temperatures and humidity, but the Sierra Leone Marathon is really physically demanding.  The effervescent red dirt tracks undulate from one village to another.  The paths are uneven, so losing your footing at any point is a real possibility.  Compared with other marathons, it is much more interesting.  You run along train tracks and bridges and scenery changes from smiling kids in remote villages to the lush greenery of the deep African jungle.

Runners are awake by 4am and the race gets going at 6am.  After only 15 seconds, the runners are starting to sweat!  For many of them, the realisation then sets in that just finishing the race is the objective and they must leave the personal bests for another day!  Here are a few words from Luke Whittaker who completed the marathon:

“It was one of the best things I’ve ever done in my life.  It was more than a marathon.  Though I may go on to run another marathon quicker, this will always be my personal best.”

If any of you have run marathons before, you’ll know the hardest part is around mile 18, as runners hit the proverbial brick wall.  This one is no different, however multiply that 10 fold (a very large brick wall).  Around this part of the race, there are no smiling kids to take your mind off the pain, only a long road, blazing sun and a very long way yet to go.  Is this what life is about?  Seeing what you really can achieve in the face of so much pain.  Do I rest or keep going?  The internal battle you have with yourself is never ending.  Keeping a positive mindset is the most important thing, and knowing that you can finish if you just dig deep.

Highlights from the Race

Runners receive huge support from locals, who come out in large numbers to cheer everyone on.  Running a marathon in the intense African heat can definitely lower morale, so the support of locals is really important.  The grind of the race is helped by the water and electrolyte stations located at two mile intervals.

Communities also come out onto the streets to hand out mangoes to tired runners as they go past.  Children shout out ‘opoto’ or ‘white-man’ as you run past, whilst motorists beep their horns in support.  Seeing the countryside at a gentle pace is incredible, and when you get tired you can just admire the stunning scenery!  Children will often even try and keep up with you.  They are so interested in knowing why you have come to their country to run such a long way!

Hannah Brown who ran the race last year, even felt like Great Britain’s most celebrated runner!  She said:

“I passed young lads, older men, groups of mothers with their children, all of them supported and cheered me as I passed and I was beginning to feel like Mo Farah on marathon day.”

Finishing by midday lets you avoid most of the heat and leaves you thinking “wow – that was a very productive morning!”  As you make your way to the final stage of the race, which is in the stadium, you are greeted by drums, cheering and cold beer!

Kitty Grub who ran in 2018 remembers her experience:

“One of the most mentally and physically challenging things I’ve ever done, but also one of the most worthwhile. I’ve never done a marathon before, so crossing that finish line has got to be one of the most exhilarating things you could ever feel, especially in that heat and especially surrounded by people who are cheering you on and willing you to finish.“ It is imperative to point out, and you will read it in the reviews, that the Sierra Leone marathon is much more than just a 4+ hour ‘race’ experience.  The main aim of the marathon is to fundraise to support Street Child’s work, which allows them to give vulnerable children access to an education.  But for participants, it is a life changing experience – going to see the children that the fundraising supports and realising how a small amount of money can change peoples’ lives is incredibly powerful, emotional and motivating.  It costs £30 to send a child to school for one year, and last year the average fundraising per person was over £2000, so you can see how much of a difference that will make.  The positive influence that Street Child have had in the region as a direct result of the Sierra Leone marathon, as well as other fundraising, is at the forefront of why runners want to achieve the impossible.

Louise Spearman, a recent competitor, talks of the great community spirit shown by everybody:

“This whole trip has been incredible. The way Street Child pulls it all together and everybody travels here together is fantastic, it is like one big community and on marathon day you’re all supporting each other.”

Competitors often hear the words ”thank you” said to them by kids as they try to keep up with them.  The children are so grateful for the money that is generated from the event and donated to Street Child.  From funding schools to making sure they have clean water, this has made a huge difference to their communities.

Street Child provides you with the chance to see exactly where your money is going.  Visiting the projects that the raised money goes towards makes you realise that you really are making a difference.  Unlike larger charities, Street Child is a Grassroots charity which empowers locals to take charge of the projects.

The Founder of Street Child said:

“I have always believed in being the change in the world that you want to see.  If you would like to contribute to the positive impact of the Sierra Leone Marathon, please consider this five-day African adventure for your plans!” 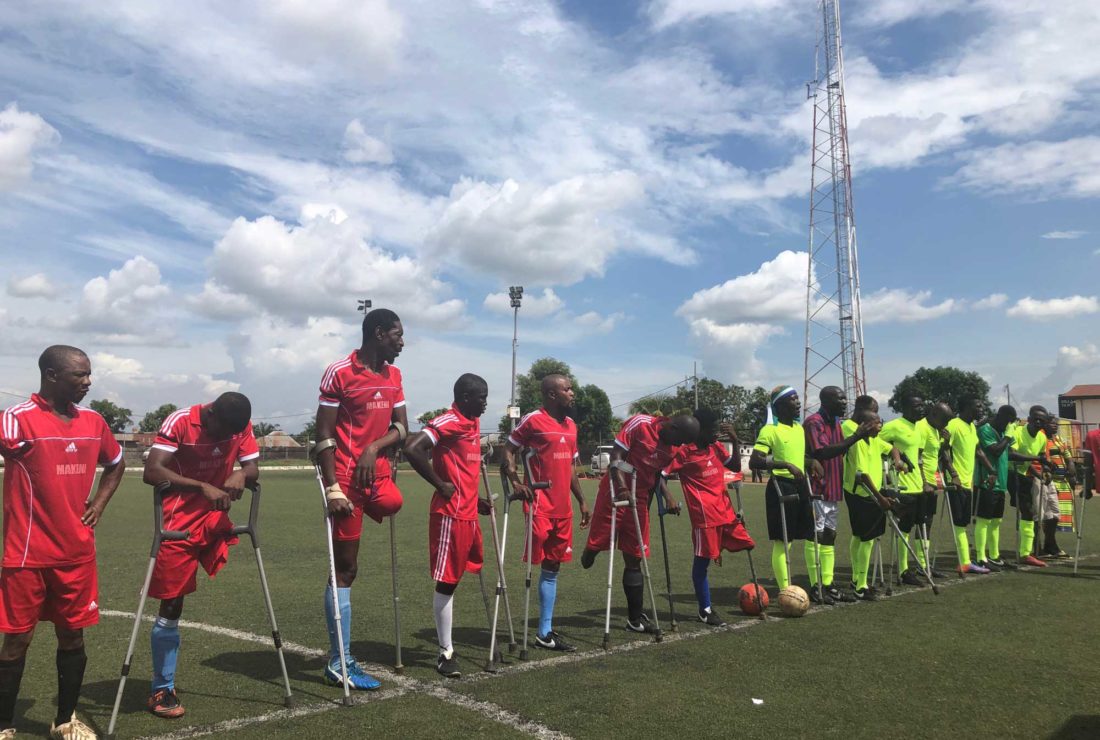 Street Child arranged a football match for people that have suffered badly from the civil war.  Their skill and speed was insane! Photo: Black Tomato

Street Child is always looking for contestants to enter the race and raise money for this amazing country.

You can sign up for next year already… get involved!