Photos from a trip volcano walking in Ethiopia.

North east of Addis Abeba stands Erta Ale,.   The searing heat of the magma is intense as you gingerly peer over the side, to get a glimpse of the red hot molten liquid.  A 4×4 is a must for traversing the large Danakil desert, which takes you 10k away from the volcano.  Erta Ale is one of the most active volcanoes in the world which is often described as ‘Hell’ due to the extreme conditions.

In some parts of the Danakil Depression pools of green acid reside.  Poisonous chlorine and sulfuric gases choke the air leading to it’s name  ”’The Gateway to Hell” The fact that its the world’s hottest and remotest place in the world doesn’t help either!  Molten magma is urging just below the crust and Temperatures reach 45°C (113°F) on a regular basis.

A Military Escort Is Required

The region in which the volcano is situated is called the Danakil Depression in the Afar region of Ethiopia.  This compared with other regions in Ethiopia is the most dangerous.    Ever since the attack in 2012  by Afar rebels which left five tourists dead and another four kidnapped, the government has enforced a rule that tourists must be provided with a military escort. 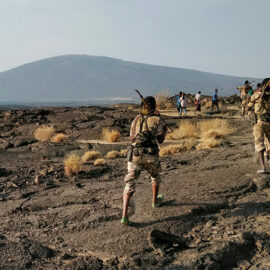 Volano Walking in Ethiopia at Erta Ale starts in the evening, so to avoid the immense heat of the day.  The hike itself is a gradual climb and takes three hours until you reach the crater.  Upon viewing the world’s longest-existing lava lake, the sudden explosions of the incandescent lava on its surface will certainly jolt you into life!

The full width of the crater. 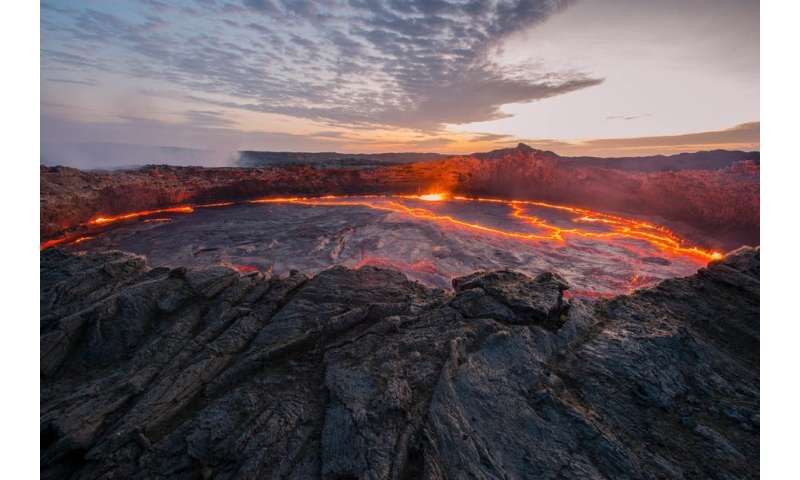 Ethiopia’s gateway to hell in all its glory.

You Fancy doing it?

The tour lasts for three days with the accommodation and amenities are basic.  It is advised that you bring your own sleeping bag, as one of the nights is spent under the stars and winds pick up during the night making it fairly chilly.

The best time to do volcano walking in Ethiopia is between October to February, when the oppressive heat is most tolerable.

The most recommended tour company to go with is Smiling Ethiopia.  They provide the 4×4, the escort up to the top and one of the guides speak decent English.