There are a few spots around the world where no ordinary civilians are allowed to visit. Area 51, Diego Garcia in the Indian Ocean, and Mezhgorye in Russia are all renowned for their secrecy. Providing a source for a constant stream of conspiracy theories. Ilha de Queimada (Snake Island), off the coast of Brazil, is a little different.

Civilians are very rarely granted access to this island, around 33km off Sao Paolo state. Only scientists are occasionally allowed to visit with an escort from the Brazillian Navy, but there’s no secret here. As the name suggests, Snake Island is full of extremely venomous snakes.

The Bothrops Insularis (commonly known as the golden lancehead) is a species of pit viper that can only be found on the island. Its origins stem from the South American continent. However, this particular population evolved from the Bothrops family to become its own species.  This was after being cut off from the mainland by rising sea levels.

The lack of predators combined with a taste for the birdlife that nest on the island. The golden lancehead population has thrived as a result. It is thought there is one snake for every square metre confined to an area of 110 acres. In other words, visitors to the island are statistically likely to be within three feet of these highly venomous snakes.

How Venomous is the Golden Lancehead?

In short, extremely. Chemical tests have revealed that the golden lancehead venom is five times more potent than its relations on the mainland. Disturbingly, a bite from these species not only melts the skin around the wound but also causes symptoms such as intestinal bleeding, kidney failure and hemorrhage in the brain – each one could be fatal on its own.

The locals on the mainland often recount legends with one particularly gruesome tale concerning a lighthouse operator and his family:

“One night, a handful of snakes enter through a window and attack the man, his wife, and their three children. In a desperate gambit to escape, they flee towards their boat, but they are bitten by snakes on branches overhead.”

With up to 4,000 of these snakes around the island, it would be a wise move to listen to the Brazillian Navy and stay away. Even though you may be able to bribe a foolhardy local to take you there – it would be a highly dangerous, not to mention completely illegal, mission.

How Can I Get There? 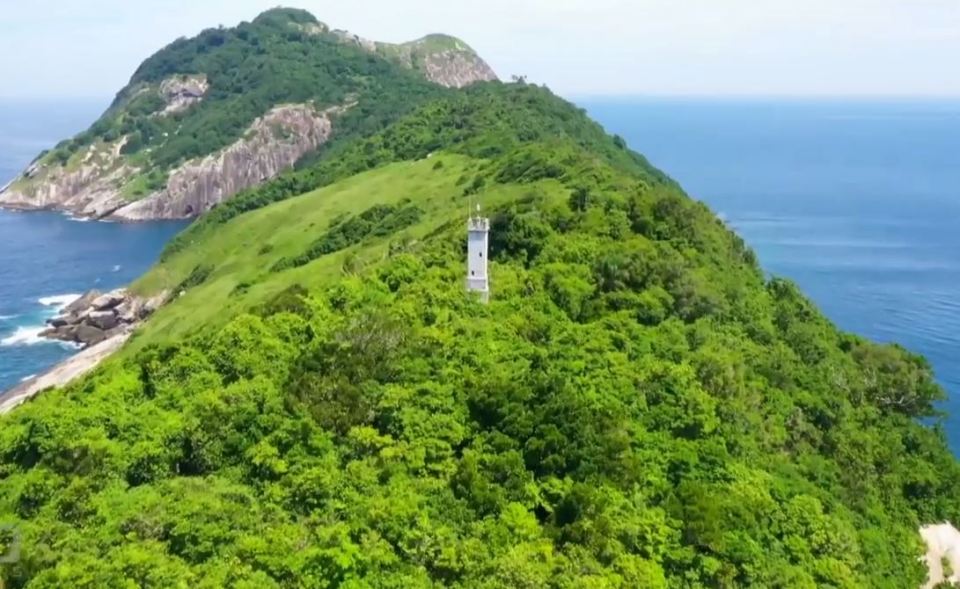 Snake Island, with the infamous lighthouse in the foreground – Source: News.com.au

Despite the dangers, some still make it to Snake Island, for entirely legal scientific and conservation purposes. Scientists with special licences make visits to the island, supported by the Navy with a full medical team supplied with anti-venom and defibrillators.

But that’s it. Even the lighthouse operators have gone.

So if you don’t have a doctorate or not a member of the Brazillian Navy, it would be nearly impossible for you to enter the island. If you are a vlogger with several thousand followers, you might like to try a cheeky media enquiry – but the likelihood is you will very probably get politely rejected.

Why Do Scientists Go There?

Paradoxically, the golden lancehead’s venom has huge medicinal potential. Already, it has been proven to help with heart disease and blood clotting, with more discoveries set to be made. Given these snakes can only be found in one place, preservation efforts to protect the endangered species are seen as critical.

The very nature of habitat being one small island poses natural risks for the population. The limited gene pool leads to interbreeding, which can cause significant health problems such as blindness and infertility. Scientists are facing a constant challenge to try and grow this population with minimal resources.

Is There Anywhere I Can See Golden Lanceheads?

Yes – but only captive populations. With polite enquiries, you may be able to see one at the Butantã Snake Institute in Sao Paolo, Brazil. This organisation specialises in the care of several species of snake from across South America, and each animal there is well-looked after.

In the extensive list of restricted places around the world, Ilha Da Queimada sticks out due to its distinct lack of mystery. There are no hidden secrets here, except for the thousands of extremely venomous snakes lurking in the deep bushes around the island. And pretty soon, you’d know about them.