How Hard Is The Tongariro Alphine Crossing?

The national geographic magazine have the Tangario Crossing in their top 3 for single day hikes in the world.  Although the hike is not insanely hard, there are dangers you need to know about to make sure you have a safe day out.

The hike is moderate with steep ascents and descents, yet for me the really cool thing was that here is where they filmed Mordor for the Lord of the rings.  The landscape certainly feels extra-terrestrial, and will offer you insane views of mountains, rugged hills and emerald lakes.

The volcanic terrains provides a reddish tinge to the rock

View from the top of Tongariro

Essential Information For The Hike

How Far: 19.4 km from start to finish.  This is a point to point hike, so you’ll need to organize transport accordingly (See below for details)

How Long: 6 to 8 hours depending on how fast you go

Off Limits: It’s now no longer possible to climb Mount Tongariro or Mount Ngaurahoe.  The latter was filmed in the lord of the rings for Mount Doom.  This is because of the government declaring them sacred ground.

The Elevation: There is 765 meter elevation gain

Where is it: The Tongariro National Park, North Island of New Zealand.

The hike map of the Tongariro Alphine Crossing

Hiking the Tongariro Crossing takes nearly  20 kilometers to enjoy all the rugged beauty of New Zealand’s oldest national park. It’s a dual World Heritage Area, honored for its amous for its three active volcanoes and Maori cultural significance. You’ll see evidence of recent lava flows, ribbons of steam from geothermal energy venting from the mountainside and striking emerald green and turquoise blue lakes that are as cold as they are mesmerizing.

You must be prepared, organized and fit for this popular climb, which winds along a track that is famous for unpredictable weather. When a Kiwi calls it just a “walk,” don’t be misled. You’ll definitely find yourself out of breath more than once, but it’s worth it.

The hike climbs up through volcanic terrain, with old lava fields, walks through giant calderas, and even past a smoking, steaming volcano that erupted just six years ago. The volcanic activity of the park is constantly being monitored, with warning signs at various points along the trail alerting hikers what to do if an eruption should occur. Already we have a little of that danger that we have been so desiring! This should prove to be a very interesting day.

You don’t need to be an expert walker, but at the same time this isn’t a casual walk.  You need to be in fairly good shape.  If you don’t feel you could do a 6 to 8 hour hike, it would be best to do some shorter distances to build up your fitness.  Every summer over 130,000 people hike the trail, so it obviously doesn’t put many people off!

It can be dangerous yes.  The weather is changeable and in poor conditions, it becomes harder to navigate. Visibility is reduced and heavy snow can make it hard to find the way.  Parts of the track are covered with loose stone which is slippy even in good weather.

At the top of the summit, air becomes thin and can make breathing difficult.  You may even feel dizzy due to oxygen deficiency.  Make sure to take your time and do it with a buddy. 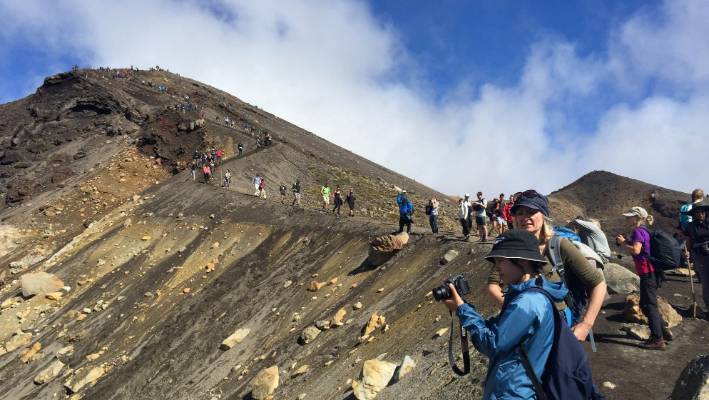 In places there are steep drop offs to be aware of

The volcanic activity has led to vents forming along the trail.  These let out extremely hot steam which just at the beginning of this year (2020), burnt a walker who strayed to close to them.  Authorities strongly advise people to keep to the designated paths at all times. 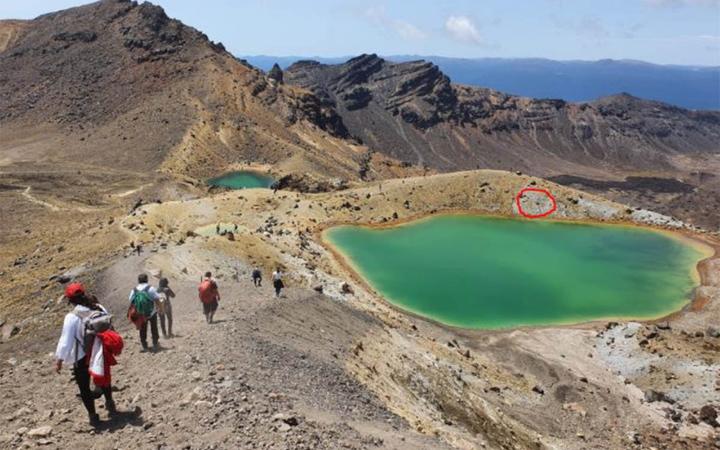 The circle shows where the hiker burnt himself. Source RNZ

Preparation For The Climb

Even though there will be plenty of people walking along with you along the 19.4 kilometers, you must prepare yourself. Weather at the peak is dramatically different from what you’ll see at the trailhead, so bring many layers, a hat and even gloves during the summer months. While the walk can be completed in the winter months, from May to October, you’ll need crampons and an ice axe. During the winter, it’s not a bad idea to hire a guide who is an expert in cold-weather climbs.

Is It Best To Bring Walking Boots?

It really is.  This is the best way to feeling comfortable along the hike.  They also offer protection from the elements. The wet and cold are something you will experience along the way!  Besides that they offer grip as parts of the trail are slippery.

You’ll also want to check the weather before you head out. If the winds are more than 60 km/hour, it’ll be best to postpone your trek. The three volcanos, Ngauruhoe, Ruapehu and Tongariro, are also active, although Tongariro hasn’t erupted since 1897. You can check to make sure they’re safe before you go, too.

The Tongariro volcano has not erupted for over a 100 years

Finally, be honest with yourself. Are you fit enough? It’s a long hike, and it’s always better to turn back – provided you haven’t crossed the Red Crater – if you feel like you can’t go on. You’ll be climbing from 800 meters to 1,900 meters above sea level and down again. While parts of the trail are level and easy, other parts are covered with volcanic gravel and steep. It’s possible for some children to complete it, but it’s not a beginner hike.

There are toilets at both car parks at Mangatepopo to Keteahi.  There are also toilets along the route.  The first being before ascent starts about an hour into it, and also at the top before the descent starts down to the Ketetahi car park.  Remember to bring toilet paper as the restrooms don’t have any.

How To Organize Transport

The Tongariro crossing is not a circular trail! This means you have to sort out transport by booking a shuttle service to and from the national park.

Shuttles run seven days a week throughout the day.  The first shuttle departs at 6 am with the last at 4.30 pm.   This means you’ll have to be finished by 4.30 om so you’ll be able to catch the last one.  In the summer it can get busy, so it’s advisable to book.  Check the shuttle service here.

If you plan to start the trail near Taupo, the return shuttle costs 70 NZD per person.

Booking a guide – For a winter hike you can do this and will cost 165 NZD per person. 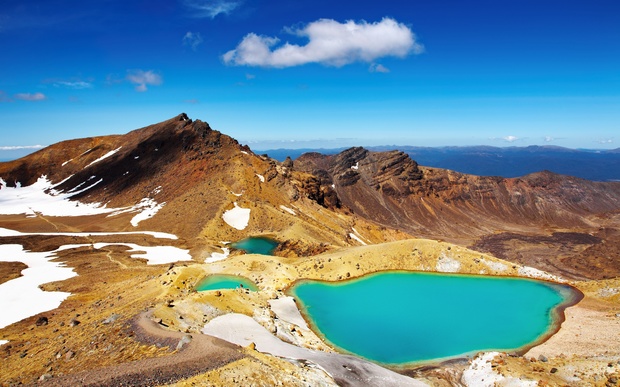 The emerald green lakes at The Tongariro Crossing. Photo RNZ

What to do when Entering the Park

While the entrance to the park itself is free, you’ll need to reserve a spot on a van of one of the licensed tour companies. Even if you have your own car, there are two reasons why this makes sense. First, the government recently implemented a four-hour parking limit at the trailhead parking lot. Second, the hike is only one way. Getting a ride is much easier!

Any place you stay, provided it’s south of Lake Taupo, will be able to help organize your ride. There are a wide range of accommodations available in the nearby towns, which include Taupo, Turangi, the National Park Village, Whakapapa Village and Ohakune. You can choose among cheap backpackers and posh lodges, and they’re all between 20 minutes and an hour away.

There are also holiday parks nearby for in your campervan. Turangi is probably most recommended, as it has shops so you can stock up on supplies for a filling meal after the big excursion. 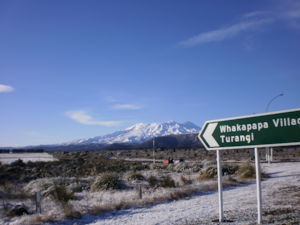 THE START OF THE HIKE

Once you’ve been dropped off at the Mangatepopo car park, you’ll probably notice how cold it is.   We had a cloudy start to the day with temperatures around 5-7 degrees.

The weather is very changeable and once the clouds start to dissipate, the weather soon starts to get warmer.

The first part of the walk is a steady incline.  This is known as the “Devil’s Staircase” and for good reason.  The volcanic boulders cover the blackened landscape.

It takes you up the Mangatepopo Saddle and over to the South Crater. From there, you’ll head to the highest point of the trail, called the Red Crater.

This is where you’ll get a view of the amazing Emerald Lakes, as well as the blue lake, which is officially called Te Wai-Wahkaata-o-teRangihiroa. The colors are so spectacular thanks to the white limestone deposits on the lake bed, reflecting the sunlight.

You’ll want to spend some time at the lakes but Swimming is not permitted, not only because the water is so cold. It’s highly acidic and emits a not-so-pleasant smell of sulfur.Thermal steam can be seen escaping from the rocks nearby. 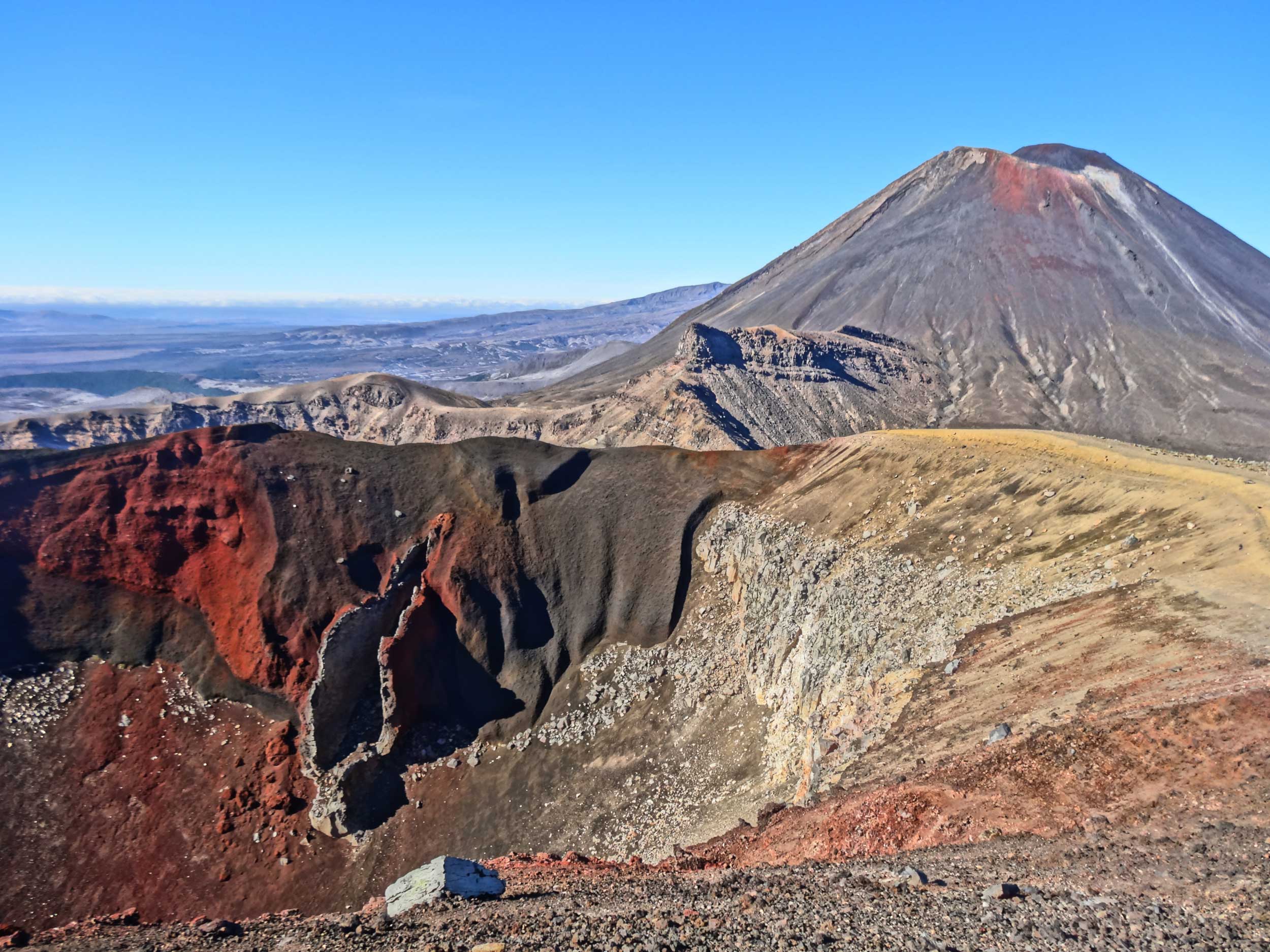 Once you start to descend – this is the most treacherous part of the trail, so take your time – you may want to stop for a leisurely lunch at the Ketetahi Shelter. Here, there are toilet facilities, although there are nine long drop toilets scattered throughout the trail. Be sure to pack out your rubbish, as there are no bins anywhere on the trail.

After lunch, it’s another couple hours of easy decline, past steam vents and more epic vistas that help you see why the land holds such value to the native Maori peoples. In the summer, a clear view can extend for miles. You won’t see a lot of wildlife on the trail, since the harsh lava flow and fires destroy the environment. You may see a wild bird, known as a pipit. But don’t worry – the otherworldly views more than make up for it.

The last highlight was witnessing the Te Maari Crater, with its vertical plumes of white steam.  Eventhough there haven’t been any eruptions for the last eruption, there are often potential eruption warnings.  This is active volcanic territory!

The trail ends at the Ketetahi Shelter. Your shuttle bus will be waiting for you back home for a warm shower, a big meal and plenty of smiles.  As Hiking the Tongariro Crossing is undeniably one of the best walks in the world.

THINGS TO KNOW ABOUT THE TONGARIRO ALPINE CROSSING

Best To Avoid Weekends. Having done the hike on a weekday, there really weren’t too many people.  We heard that the weekends get really busy.

Which direction do you do the Hike?  You can do it in either direction, but it’s more popular to hike from Mangatepopo to Ketetahi.  There’s two good reasons for this. Firstly Mangetapopo is 200 meters higher up than Ketetahi, so straight of the bat you are eliminating a large chunk of the climb.  Secondly, ascending in the shadow of mount doom is a much more exciting experience than the dreary scenery around Ketetahi.

Is it cold during the climb? It certainly is, so make sure you are dressed warm enough. This is especially true at the summit, where the wind bellows around from which there is little protection.

How high is the Tongariro Alphine Crossing?

Best time of year To Hike It?

The best time of year is between October to April.  In these months the weather tends to be less changeable.  May until September are the best months for weather but predictably the busiest.  At the peak there are 3,500 hikers every day.   The walk is possible during the winter, although guides are a must.

Can you swim in the Emerald Lakes?
It is not possible to swim in the emerald lakes.  The lakes are extremely cold and very acidic.