The Bog Snorkeling Championship in Wales has developed an unlikely cult following.

People are coming from all over to bear the wind and rain of Wales to watch this crazy championship.  The even takes place at Llanwrtyd Wells, situated no more than a three hour train ride from Cardiff.

How Did The Bog Snorkeling Championship Get Started

Llanwrtyd Wells was host to the first championships that began in 1976, where an over-the-bar conversation in The Neuadd Arms between Gordon Green and a few regulars resulted in the championships being started.   While many people associate snorkeling with the beauty and majesty of coral reefs, others enter the Bog Snorkelling Championships!

What Do Contestants Need To Do

The event involves competitors swimming through two peat bogs in the shortest time.  The peat bog measure 60 foot long containing cold and murky water.   The record at the bog snorkeling championship to date stands at one minute 22 seconds.  Last year there were 150 swimmers that entered coming all over the world, including South Africa, Australia and Sweden.

Contestants arrive at 10 a.m. at the Waen Rhydd bog and don a snorkel and flippers as they aim to cross the bog in the shortest time possible.  Some people even wear costumes like superman’s and batman’s wetsuit.  The event categories are split into men, women, children and also into age groups. 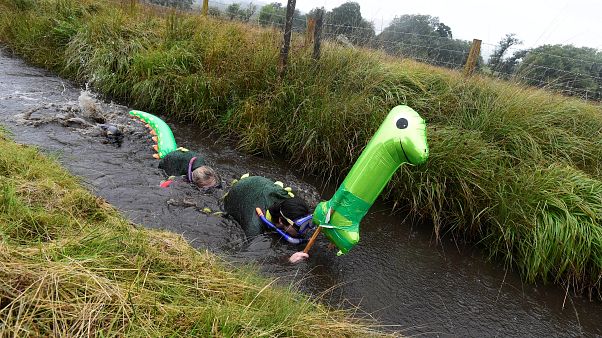 No traditional swimming strokes are allowed

Swimmers are only allowed to wiggle or splash their way to the finishing line.  No traditional swimming stroke is allowed.

What do the snorkelers say?

”The surprising thing is you really can’t see a thing and the taste is like a bowl of water after you have washed potatoes in it, not pleasant”

Other Events Around The Going On

After the showcase event of Bog Snorkeling, there is the Mountain bike bog snorkeling event.  This involves riding a bike for six feet in an underwater trench.  Presently the records stands at one minute.

Another nuts event is the Bog Triathlon.  The event follows the traditional sports of the triathlon of running (8 miles) and cycling (12 miles), however swimming is replaced with, you guessed it bog snorkeling for 60 yards.

Donations from the event go to the Cystic Fibrosis Trust and the Motor Neurone Association.

Do You Want To Come?

If you want to come this year, please check out their website here.

If you can’t get to this one there are other places in the world that hold similar events, such Australia, Ireland and Sweden.