Viking Festival in The Shetland Islands

Every year, people on the Shetland Islands celebrate their Viking past with a festival called Up Helly Aa.

Islanders in elaborate costumes brandishing fire torches, parade through the streets of various towns on the islands.  The festival wraps up with a dramatic burning of a Viking ship.  The festival not only connects the past with the present, but also shows off one of the most influential cultures in history.

Where are the Shetland Islands?

The Shetland Islands, situated on the north coast of Scotland are cold and dreary throughout the winter.  However, during the month of January they are completely transformed as the towns across the islands are, quite literally, lit up!

The Shetland Islands consist of over 200 islands, yet less than twenty are inhabited.  The festival celebrations take place in all the towns in the archipelago.  The main fire festival takes place in Lerwick, with a further eleven more happening in other locations.  Here is the most recent schedule of events for the festival.

Where did it all come from?

Up Helly Aa originates from a tar-barreling festival, where locals on the islands would drag burning tar on sledges around town, causing absolute bedlam!  Considering everyone’s drunkenness, this understandably caused a few concerns.  Tar-barreling was only practiced by the lower class, and with the more well-off folk getting exasperated at the vandalism and violence, this was consequentially changed to an annual torch procession roughly 150 years ago. The burning of a Viking galley was added soon after.  This is carried out to pay homage to the islands’ Viking past, as it wasn’t until 1468 that the Scottish managed to take back the land from the Viking warriors.

The Procession of the Guisers results in the torching of a Viking longboat, whilst everyone sings and dances wildly around the inferno.  Unfortunately, even after recent calls to change the rules, women are still forbidden from participating in the processions.  You also have to have been a resident for over five years to take part in the processions.

At the turn of the last century, the idea of having a principal Viking was introduced. The Jarl is the principal Guiser who leads the celebrations by singing and chanting, with his squad following suit.  The Jarl’s squad are his supporters and they are the principal Guisers in the procession.  The Guizer Jarl can only be elected to this position from a committee, and each Jarl draws inspiration for their chosen costume from a Norse legend, adding to the mystique of the spectacle. 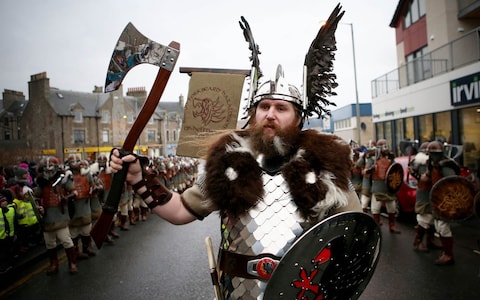 The Guiser Jarl leading the procession – Source The Telegraph

After nightfall, all the squads dressed in their own themes expect to see far more than Viking costumes!   On arrival, all the Guisers form a circle around the boat and sing traditional Up Helly Aa songs.  They then proceed to burn the Viking  boat,  a new one of which is built every year for this purpose.  Once the flames have died down, they sing the traditional Norse song, ”The Norseman’s home’‘.  The Viking festival comes to a close with a predictable heavy night of partying and drinking, as the Guisers take turns dancing with the guests in establishments across town.

Guisers dancing and singing around a Viking longboat – Source The Smithsonion

It is best to stay in Lerwick, as this is main focal point for all the festivities.  This means you won’t have to worry about parking and transport to and from the festival.

Here is a full listing of accommodation.

Getting to the Shetland Islands

There are flights from all the major cities in Scotland to Lerwick, taking about 90 minutes.

Alternatively, there is a 12 hour ferry from Aberdeen, which also takes you to Lerwick.

Lots of warm clothing, as during January in the Shetland Islands, it can get down to 3 degrees.