The Best Spots You Need To Know In Oahu, Hawaii.

Oahu has everything you need if on occasions you like doing crazy things.  If one of those is throwing yourself off cliffs and waterfalls then you are in luck.

Cliff diving in Hawaii is very popular and this island is no different and is often though of  being the perfect place.  We’ve put together a list of the most popular spots and also the lesser known ones you should check out

Always make sure you are diving with someone else. Be safe and only dive what you feel comfortable with.

Never take a blog post as gospel, always check the conditions yourself to make sure the jump is safe.  Jumping sites are constantly changing due to erosion or other reasons, so judge that everything is safe for you to make a safe jump.

Rising up from the ocean below, China Walls is a wavy rock formation that is shaped by some of the biggest waves on the island.   Situated in Portlock, Oahu, waves get up to 40 feet in the summer months.  Surfers come to test themselves and spectators crowd the China Walls to witness it.

When the sea is calmer, the 4 meter jump into the sea is ample height to throw flips.  It’s not so easy to climb back up the ledge but its doable.   The ledge is ready made chill out area to watch the sunset and have a few beers with friends.

Surfer looking out over China Walls

This 30 ft nerve shredding jump, located on the north coast of the island of Oahu, will leave you wanting more.  A famous spot due to the fact that it was a scene in the move ‘Forgetting Sarah Marshall”, it is certainly a well-known spot on the island.

Just make sure if you take the plunge, do it during the summer as during the winter months the waves get seriously large.  Getting stuck under these cliffs with big waves pounding is a place you certainly don’t want to be.

It’s pretty accessible with a ready made creak which makes makes it easy to ascend back up to the top for more action.  It’s a popular spot, so don’t expect to be the only ones there.  Once at the bottom there’s a few rocks for you to chill on (especially for those summer months when the waves aren’t too crazy)

Climbing up the cliff at Laie Point

PLEASE NOTE YOU’LL BE TRESPASSING IF YOU COME TO THIS SPOT.

This isn’t really a cliff jump but more of a Tank jump!

The jump is on the way to the Lulumaha Falls, situated about half way along the route from Pali Hwy, you’ll get to a reservoir.  Once you arrive there, you’ll need to traverse a fence and you’ll enter an ILLEGAL AREA.  The second fence you need to get over, you have to be ultra careful as one slip and you’ll end up falling in uncontrolled and possibly hit the water jump.

Getting back up is simple, as there is a grassy verge that runs along the shoreline.

This one isn’t for the fainthearted, and certainly shouldn’t be tried by beginners.  Experts make their to the water tank near the middle of the reservoir and proceed to throw themselves of the 35 ft platform.

This is the most insane cliff dive in this list.  Situated in Portlock, this 80+ft jump is extreme. The height is not the only thing you need to think about,  once you finish you dive, you then have to get out.  The swells near Hanauma Bay are rough.  Spitting Caves is just around the corner, perhaps that is the better option. 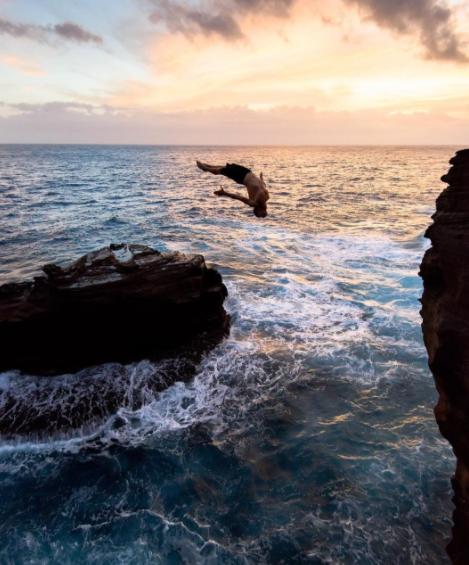 Cliff diving in Hawaii doesn’t normally reach 80 ft dives, but the leap of faith jump does.

If you live in downtown Honolulu, then this one is for you.  The best thing about Oahu is you can easily find jungle wilderness right on your doorstep.  Mauna Wili Falls is no exception.  Following a 2 mile treacherous trail of slippery rocks and protruding tree roots, you’ll reach a really special place.  The waterfall gently flows down the rocks from 20 feet into an ominous murky basin.  The jump itself is 30 feet high into the dark water.  As you can imagine with it being difficult to see, it’s important to check for any hazards, like rocks hidden just below the surface.

The foliage is really think around the top

It’s a popular spot being so close to Honolulu, so expect some company.  Other cool stuff is that there is a rope swing to play around with!

This one is recommended for all you beginners out there.   A huge rock that juts out into the ocean offers loads of possibilities for launching yourself from.   Standing from the top, looking down into the murky water, you maybe forgiven for thinking that its dangerous.  However there aren’t many rocks underneath the surface so this with the easily accessible climbing (stairs) up the rocks makes it for a pretty safe day out.  The max height you can do on this location is about 5 meters, which is more than enough for me!

The rock at Waimea Bay sets on white sand

A travel writer called Julie Cao, decided to face her fear and dive in here. Writing in here travel blog called Always on my way she remarked,

It gets crowded on top as people catapult

Other cool stuff to check out is that sometimes you can see turtles cruising past just underneath the surface, or maybe you can join them as they head down the underwater tunnel which runs directly through the rock.

It’s best to do this during the summer months as there are some monsters waves that crash this coastline during the winter months.

Just behind the aforementioned jump, Waimea falls is located just behind the beach.   Cliff diving in Hawaii has a fair chance incorporating nature walks, and the Jurassic park like terrain at Waimea is no exception.  This waterfall jump is truly epic. 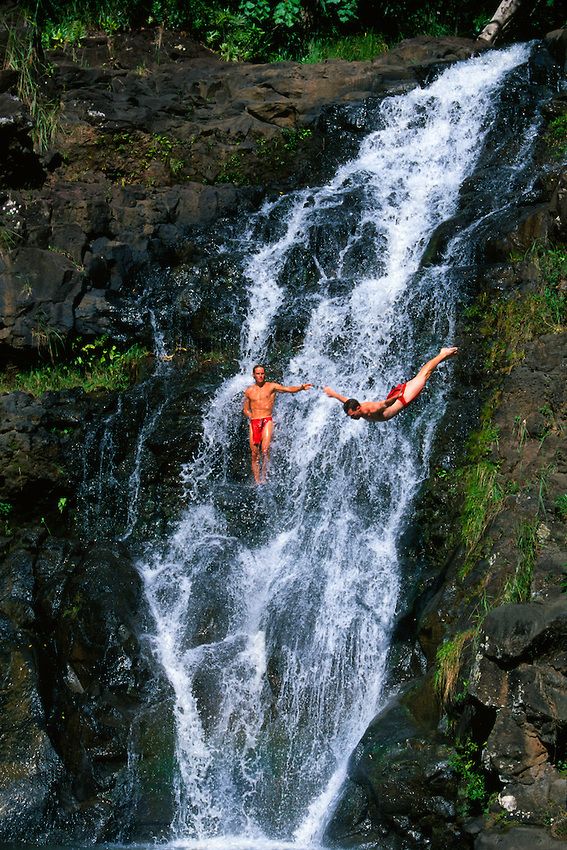 This one is the most dangerous for cliff diving in Hawaii on our list so please guys be extra careful here and make sure to ask locals for some insider knowledge on the perfect spot to dive in.

The cliff jump at Spitting Cave. Once at the bottom the currents are pretty strong.  This jump is 40 feet.

At the highest point you can jump is at 70 feet, whilst there are lower platforms, they are all of a considerable height.  Looking out over the cave, you’ll be taken back by the ferocity of the waves.  Huge surges of water blast out from the cave system as pressure builds with each ebb and flow of the water.

You should be able to get some really nice footage from this location, but you need to be confident when taking on this beast.

This jump is close to the popular Makapu’u Lighthouse Trail, on the east of the island.  Compared with the other spots, this is certainly more low key.  Wedged into the rocks, planks protrude into the mostly calm ocean below.  All the conditions are right to enjoy flips and diving into the crystal waters below.

It’s a popular spot among locals, so to avoid the large groups of school kids avoid the weekends. 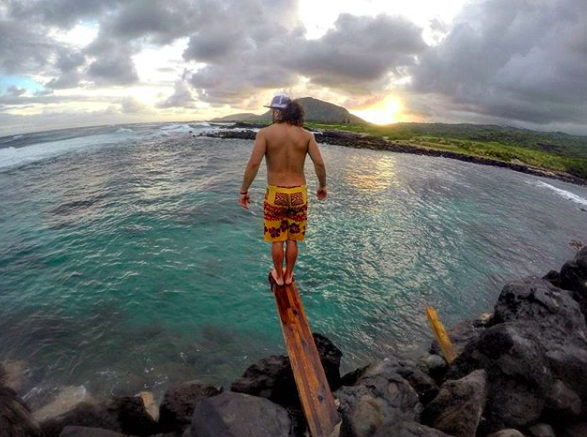 Looking out at the Alan Davis plank jump.

Full of stunning beaches and awesome walks, the west of Oahu is the most beautiful yet least visited part of the island.  Situated close to Yokohama beach, there are some good places to jump into the ocean.  This is certainly quieter than the other places on this list, yet it a great place to let of some steam with your friends.

This is for all you dare daredevils out there.  This jump is over 40 ft in a water basin.  The water here is murky, so make sure you take a swim to check for any rocks or loose debris in the water.

Situated near the Nuuanu Memorial, you’ll have to traverse a short jungle work.  Once you arrive, you will welcome the watering hole with open arms as you jump in to cool off.

A nice day out from the mainland, Mokulua Island is 20 to 30 minutes canoe ride from Lanikai Beach.  The twin islands offer a variety of jumps.  There’s one which is four meters into the ocean below.  If you are feeling more adventurous , there is one massive jump.  Climbing up the cliff side, looking down into the clear water below you make the leap.  Make sure you clear the land, as in parts it is precarious.

The huge jump at Mokulua

A great way to refresh after the Waimano falls hike.  A 4 meter jump into the watering hole is much appreciated.  Also there is a rope swing. 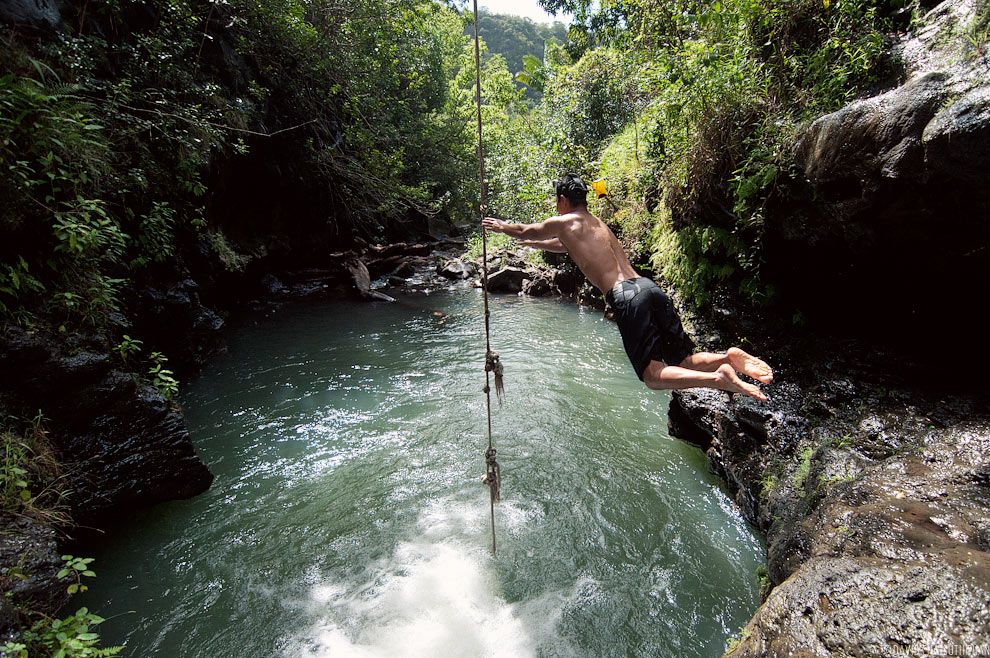 There are many signs on rocks and beaches warning against the dangers of cliff diving.  It isn’t illegal, but authorities actively warn about the dangers.

For other cliff diving articles on this site, check out our review of the best cliff diving places in Vancouver.