Man Almost Eaten By A Hippo

A hippo the size of a range rover inflicted 39 major wounds on safari guide Paul Templer.

Africa is full of dangerous animals, but none more so than the Hippo.  Paul takes us through his survival story of nearly being eaten by a hippo.

How Many People Get Eaten By A Hippo Every Year?

Over 500 people each year die from hippo attacks.  Considerably less than snakes which is over 50,000 people that are killed annually.  This may seem a huge difference, yet hippos are still incredibly dangerous.  Their territorial nature makes them put up with very little.

Hippo going after a human

Eventhough hippos spend most of their lives in the river, they can’t actually swim.  This makes them especially dangerous, as walking along the riverbed gives them a good vantage point for surprise attacks.

After spending most his twenties on the waters of the Zambezi river in Zimbabwe, he got to know some animals even more so than his own friends!  However one afternoon this familiarity didn’t count for much, as he tried to escort of a group of tourists back to their base.

It Was A Tranquil Evening

Dusk is an extremely tranquil time of the day on the Zambezi, as the sunsets over the plains play out to the relaxing sounds of the river’s flow.  Paul along with three colleagues (Ben, Evans and Mack) were in charge of escorting a tour group who were coming to the end of their day’s activities.

”Making your way through a pod of hippos is like a chess game, as you need to think strategically in plotting your route through them” 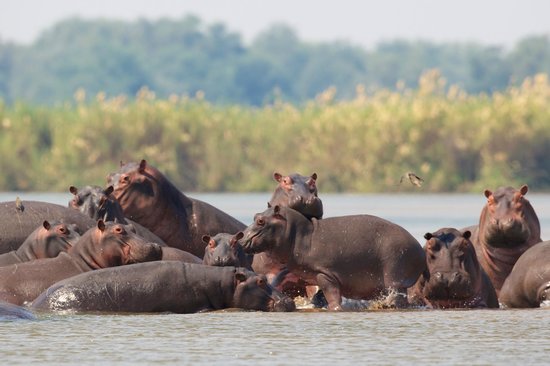 A pod of hippos playing

Everything was going just how Paul wanted, he successfully navigated his way through the majority of them.  Just as he made his final move, he heard a sound that all seasoned veterans to the Zambezi dread; a loud bang.  He turned around to see his colleague Evan being catapulted into the air.  Seeing his friend submerged in the water, Paul had no choice but to go and save him.

A Tidal Wave Heading Towards Him

Just has he was approaching his colleague, he saw what he could only describe as a mini tsunami making his way towards him, in the same way a torpedo was on the verge of striking a ship.

A Giant Crocodile or Hippo?

Seeing it hone in towards him, he know it was either a giant crocodile or a hippo.  From his training he knew that slapping the water was the best course of action, then everything went dark.

Remembering the crippling pain on the base of his spine was intolerable.  Paul feeling the bristles from the hippo’s mouth suddenly realised he found himself head first down the throat of the hippo.

Face To Face With The Hippo

Unexpectedly the hippo quickly proceeded to spit Paul out.  Staring into the pupils of the hippo, Paul shouted at Evan ”we need to get out of here!”  As Paul was shrieking, the hippo this time coming from below chomped on Paul again.

Paul’s Legs Were Now In The Hippo’s Mouth

Now in reverse, Paul’s legs were trapped and his upper body was free.  He quickly came to the understanding that fighting was futile.  As he let his body go limp, the hippo spat him out again.

Bruised and bloody Paul could see the riverbank.  He made his escape. Now the Hippo really wasn’t in the mood for playing any games. 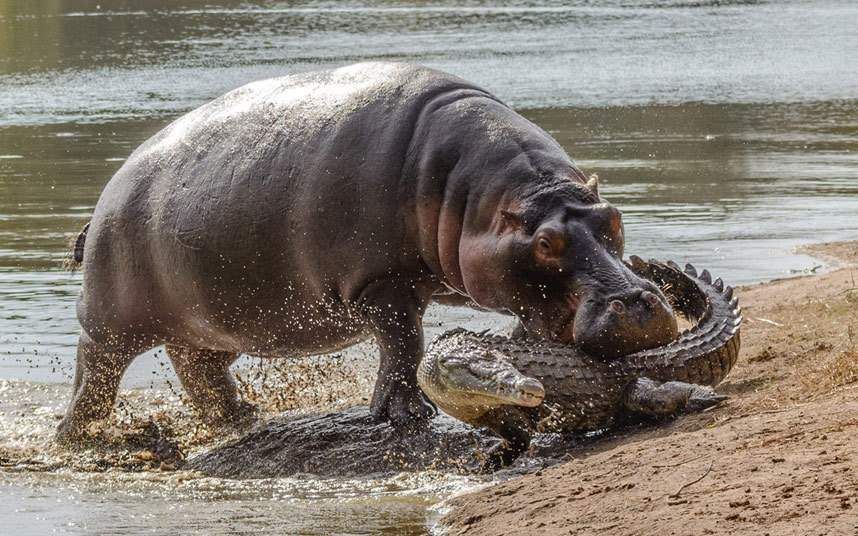 Hippos also have canine teeth which can grow up to half a meter. Photo Quora

Upon nearly reaching the river’s edge with the last ounce of his energy,  the hippo was severe ferocity scored the most lethal of direct hit on Paul’s torso.

A tourist who was in the group later said ”it looked like a vicious dog ripping a rag doll apart” as the hippo went berserk.  With the tusks piercing his torso,  the hippo plunged for the bottom of the river.

Paul had no idea of how long he was down there and remarked;

”Time passes very slowly in the jaws of a submerged hippo”

Staring up at the light shimmering on the water’s surface, he started to think to himself, either he was going to drown or bleed to death.  Holding the hippo’s tusks trying to prevent anymore flesh being shredded, he soon wondered if soon he was going to be cut in half by the power of animal’s vice.

A Lucky Escape For Paul

Then miraculously the hippo lurched forward and spat Paul out.  As he reached the surface, his colleague Mack showed incredible bravery used his kayak to toe Paul to the edge of the river.

He has no idea how he or Mack survived to tell the tale, especially considering the anger of the animal shown in the continued thrashing as the pair tried to get onto dry land.

The Quick Thinking Of His Colleague

After arriving on the river bank he looked down at his left arm, it was just a bloody pulp of bone and flesh.  It was only the quick thinking of Mack that Paul’s life was saved from being eaten by a hippo.  With Paul coughing blood, his first aid training taught him that meant a punctured lung.  Mack fashioned a make shift tourniquet from some clothing that eventually eased the bleeding.

Something very strange then began to happen.  Everything went calm as all the pain went away.  After speaking with many doctors, they all have put it down to the physiological response to the body shutting down.  Paul feels differently, for him it was a profoundly spiritual experience.

The tour guide said ”My body was infused with incredible peace, it was my choice, should I go or should I fight and stick around”

His partner Evan, who was the first to fall in the river, was not eaten by a hippo but drowned as not a scratch was found on him .  This filled Paul with a tremendous sense of guilt, yet no matter how people told him it was an accident it still pangs him with great pain.

Getting Over The Experience

After eventually recovering from the physical scars, the mental scars remained for a long time after.  It was only until his mother gave him the stern words of ”Hippo or no hippo, its time you get on with your life”

He indeed has gotten on with his life, as he now heads up a foundation for children below the poverty line.